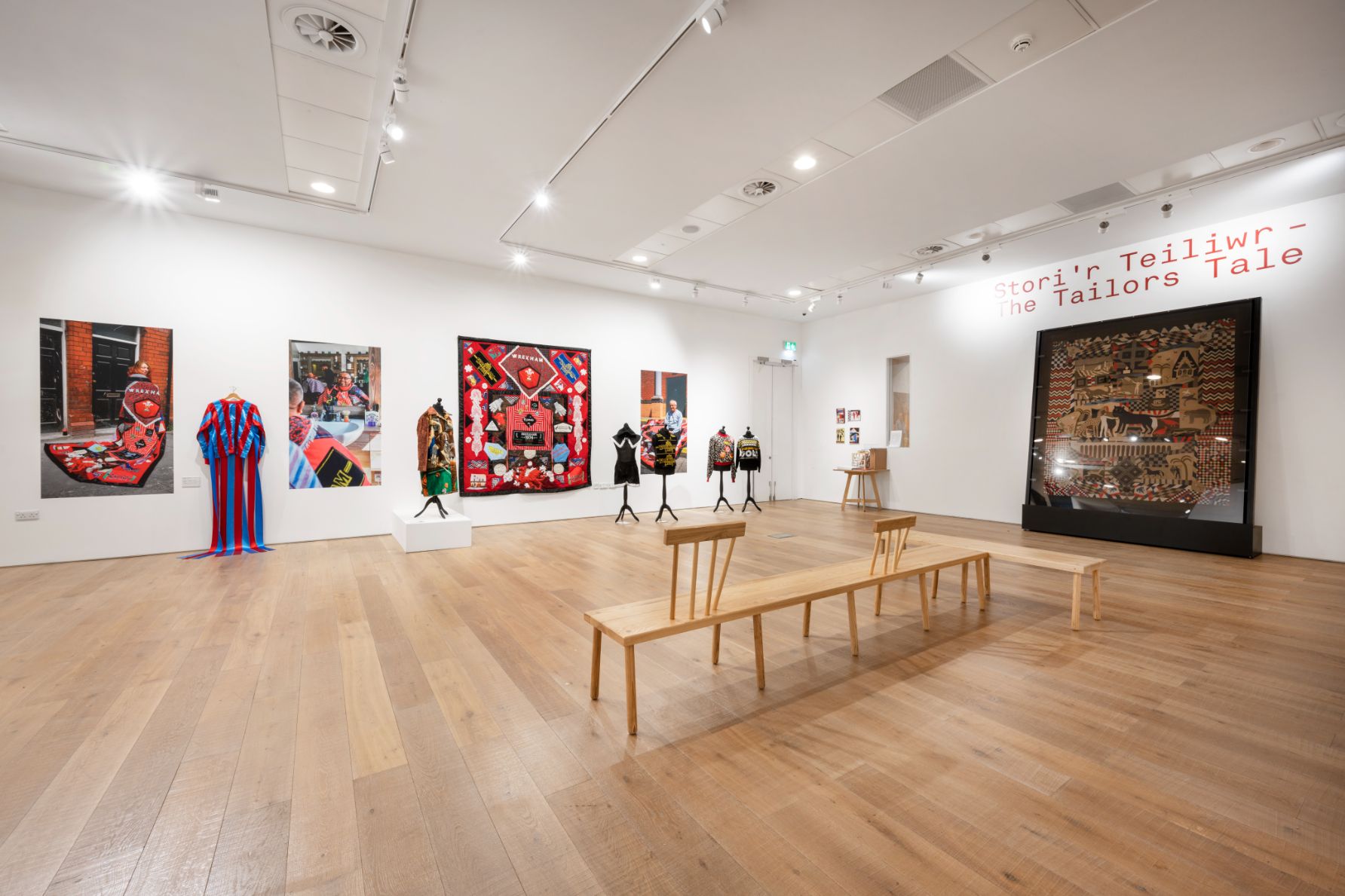 The Tailor’s Tale brings together artistic responses to the famous Wrexham Tailor’s Quilt, created by James Williams between 1842 and 1852.

The quilt, now housed permanently at St Fagan’s Museum, loaned to Tŷ Pawb for this exhibition, is actually a single layer patchwork coverlet made up of 4,525 individual pieces of woolen cloth.

The quilt depicts scenes from the Bible such as Adam naming the animals, Cain and Abel, Jonah and the whale, and Noah’s ark. It also features motifs symbolizing Wales, England, Scotland and Ireland. The Menai Suspension Bridge and Cefn Viaduct are also featured.

Such was the workmanship of the quilt, it was displayed at the Art Treasures Exhibition of North Wales, held in Wrexham in 1876 and the National Eisteddfod in 1933, also held in Wrexham.

The quilt is now widely regarded as one of the best surviving examples of Welsh folk art.

Adam Jones is Wrexham born, London based fashion designer; a contemporary tailor who has been commissioned by Tŷ Pawb to recreate a Wrexham Quilt for 2022. Adam’s quilt is exhibited alongside garments from his own collection.

Painter and printmaker Mark Hearld created a range for Tate Shop inspired by the Quilt, a piece that he has known and loved for many years. The product range is shown here alongside Mark’s original sketchbook and artwork.

Judy Fairless, Anne Gosling, Barbara Harrison and Helen Lloyd are members of the Quilter’s Guild of the British Isles. Exhibited here are their responses to the Wrexham Quilt, created for Llangollen Quiltfest 2017,

Sarah Burton, Creative Director of the fashion house Alexander McQueen, found inspiration for her Autumn/Winter 2020 collection whilst visiting St Fagan’s Museum. Shown here are ‘paper doll’ patterns used within the design process and images from the catwalk show, alongside items from the ready to wear collection.

Ruth Caswell
This exhibition was conceived and realised by the grace and drive of Ruth Caswell, the Award winning costumier and fashion designer, lecturer and enthusiastic supporter of Tŷ Pawb. We dedicate The Tailor’s Tale to Ruth’s memory.

Ruth trained as a costumier at Nathan’s in Drury Lane. She went on to work at Glyndebourne Opera and at 22 became the costume supervisor for Theatre 69 Company who later formed the Royal Exchange Theatre in Manchester. Ruth worked on Oscar winning films such as Shakespeare in Love, Elizabeth and Dad’s Army where she worked in collaboration with her former student Richard Cook. She was the textile advisor with her daughter Amy on BBC’s Pride and Prejudice.

Ruth moved to London in the 1960s, when she met and married her husband actor Eddie Caswell. Ruth said: “When we married and moved to London, we had only £12.50 to our name so I made clothes in my back bedroom and sold them in Kensington Market on a stall next to Freddie Mercury’s. I delivered them on the 73 bus each Friday and they sold instantly.” Ruth’s clothes were photographed for Vogue and worn by model Jean Shrimpton.

Ruth was a brilliant and inspirational teacher to many students when she taught at Bradford College from 1986 to 1997. Vicki Wilde a former student said that: “Ruth made you believe that anything was possible. She had a work ethic like no other and I would marvel at the energy she would have for any project that she was working on”. Whilst Ruth taught in the School of Art, she secured the future of the Bradford Textile Archive for posterity. The archive informed Ruth’s scholarly research and her MA in the history of Textiles and Dress.

Ruth received an honorary fellowship from Bradford College in 2016 and was included as one of the 175 heroes of the School of Art.

We will always be grateful to have known and worked with Ruth, she has left a lasting impact here at Tŷ Pawb and is deeply missed. We will strive to keep Ruth’s legacy of generosity and collaboration alive. 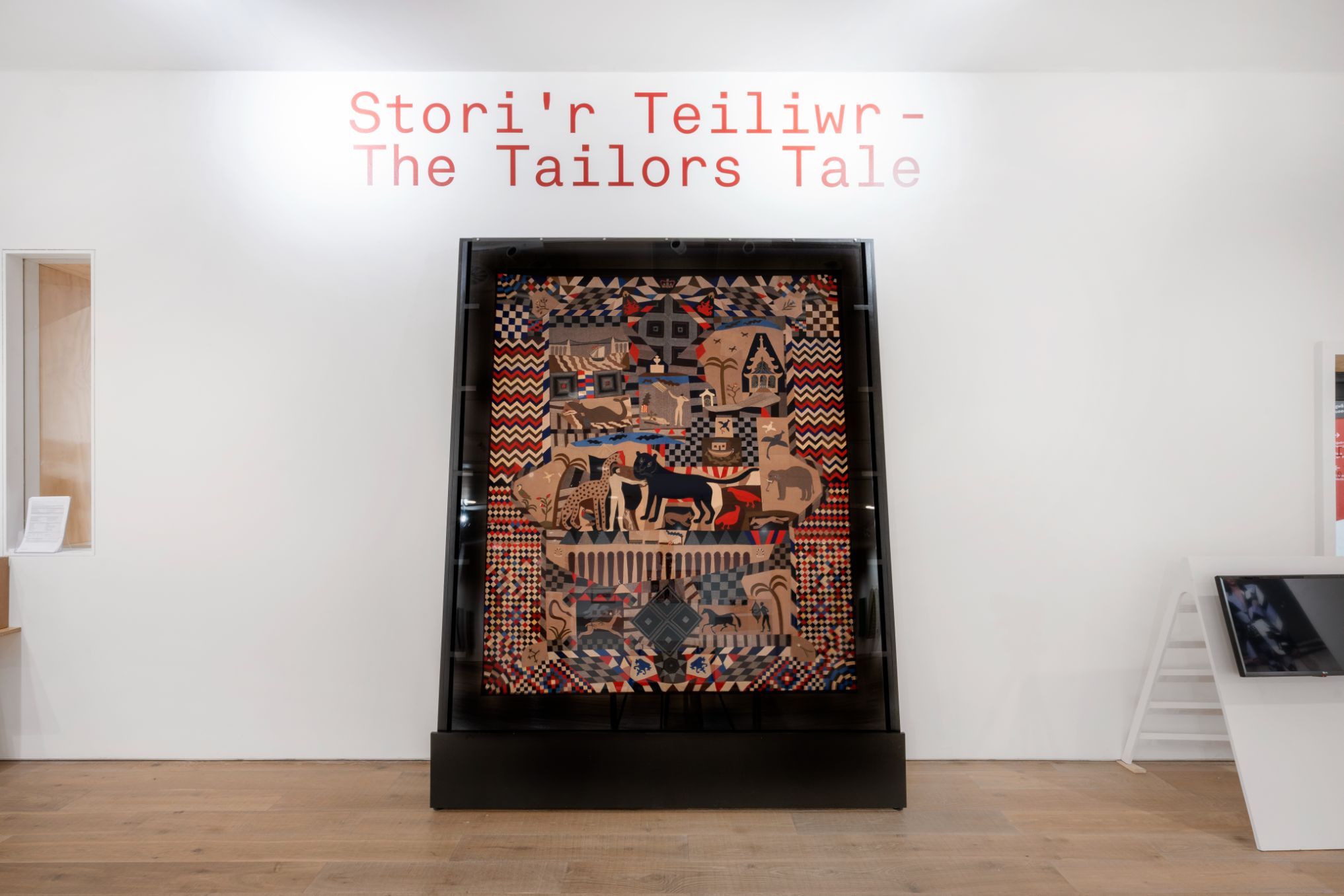 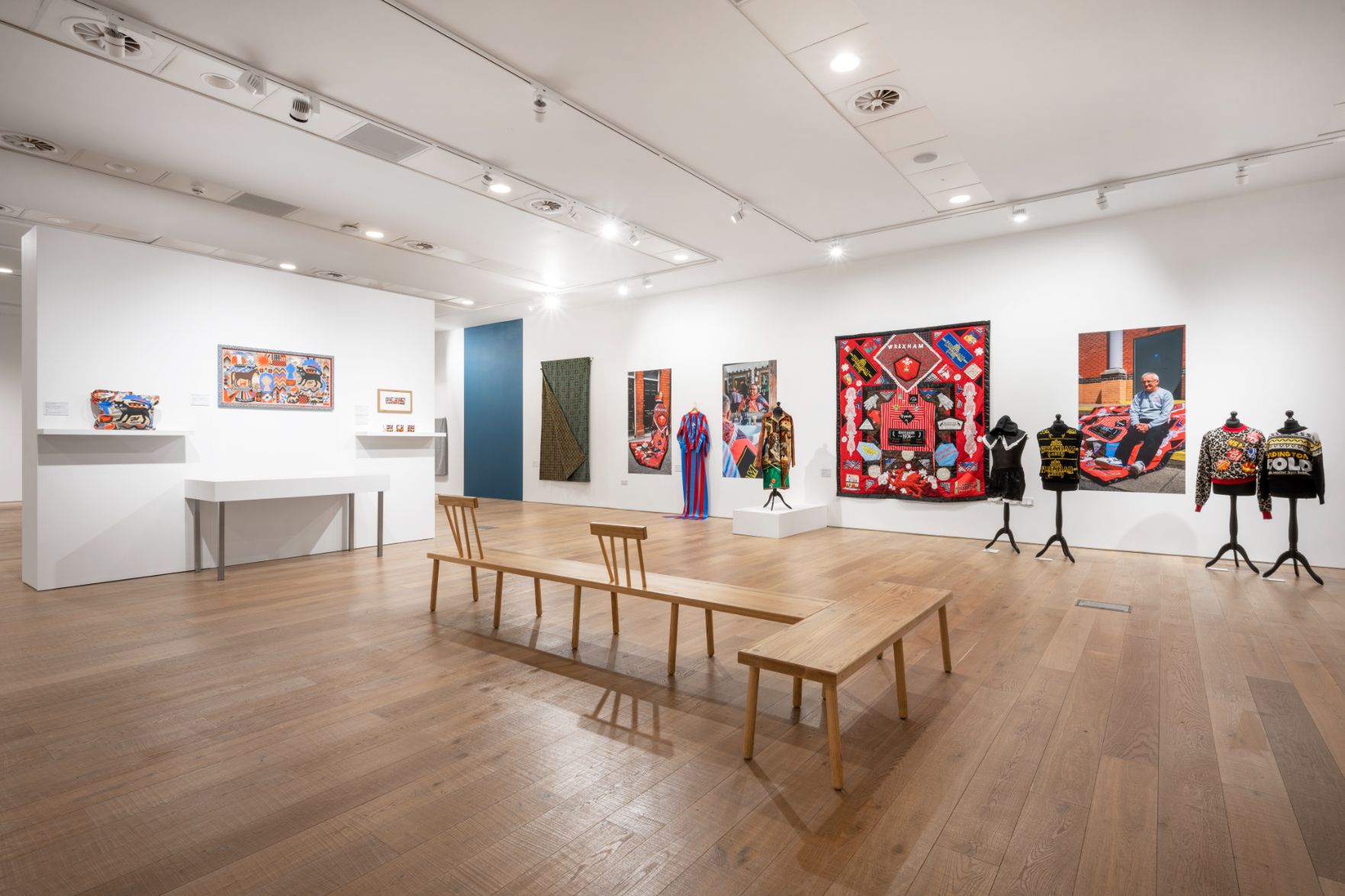 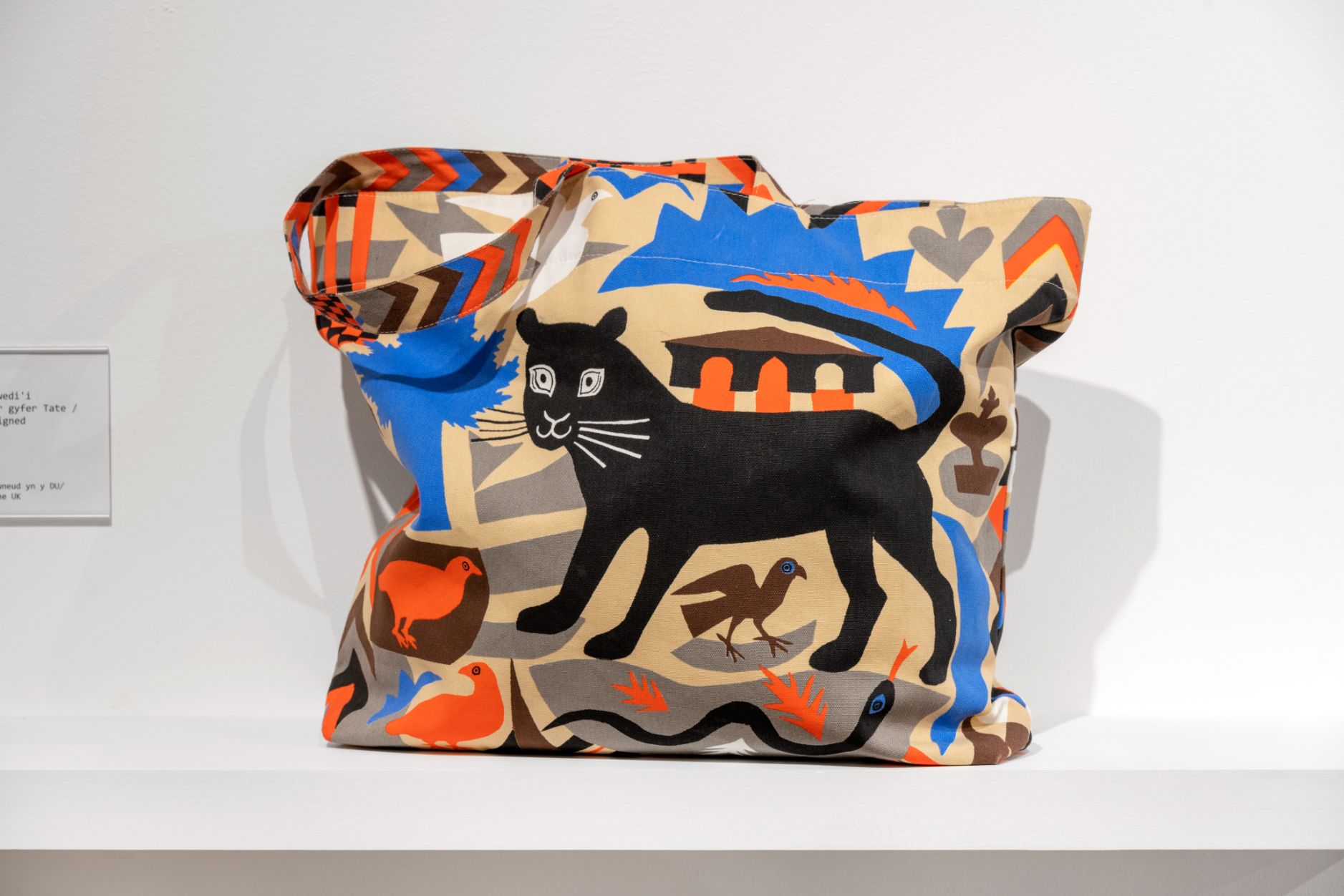 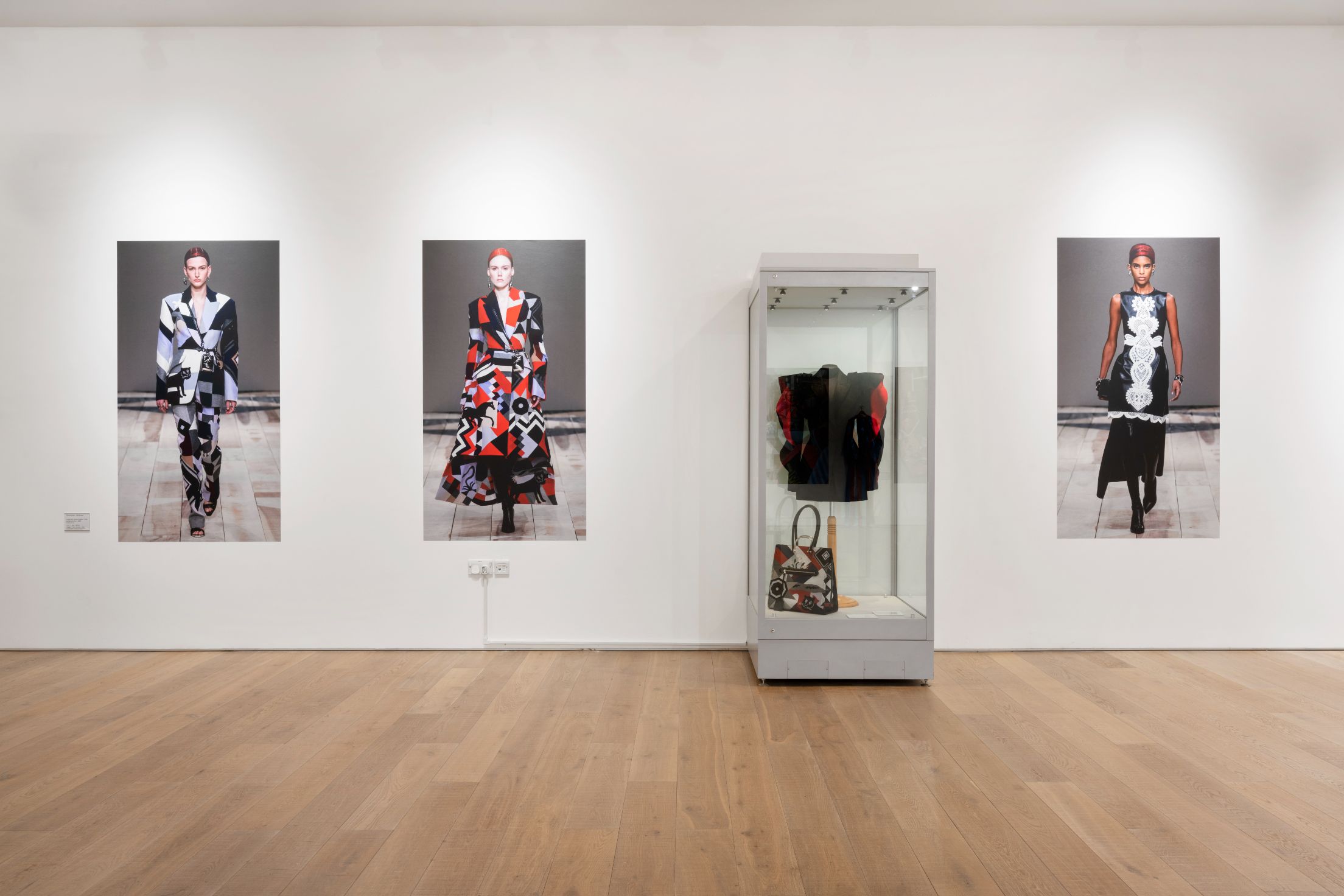