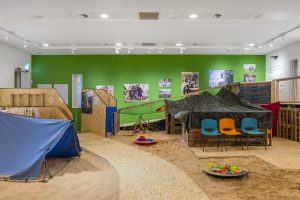 PLAY-WORK centred on the relationship between adults and children, and on celebratory documentation of radical playwork since the 1970s at Wrexham’s world-renowned adventure playgrounds.

The core of the exhibition was a playscape, designed and built in a collaborative process between the artists, Ludicology, Tŷ Pawb Staff and the local authority’s Play & Youth Support Team and Wrexham’s adventure playgrounds. Within the playscape was new commission by Morag Colquhoun, who created textiles specifically for interactive ‘loose parts’.

Functional push-cart artworks designed by Gareth Griffith also featured. The carts were fabricated by children and staff from wrexham playwork projects. Additionally, ‘The Voice of Children’, a film by Turner Prize winning collective Assemble, was be exhibited in the gallery.