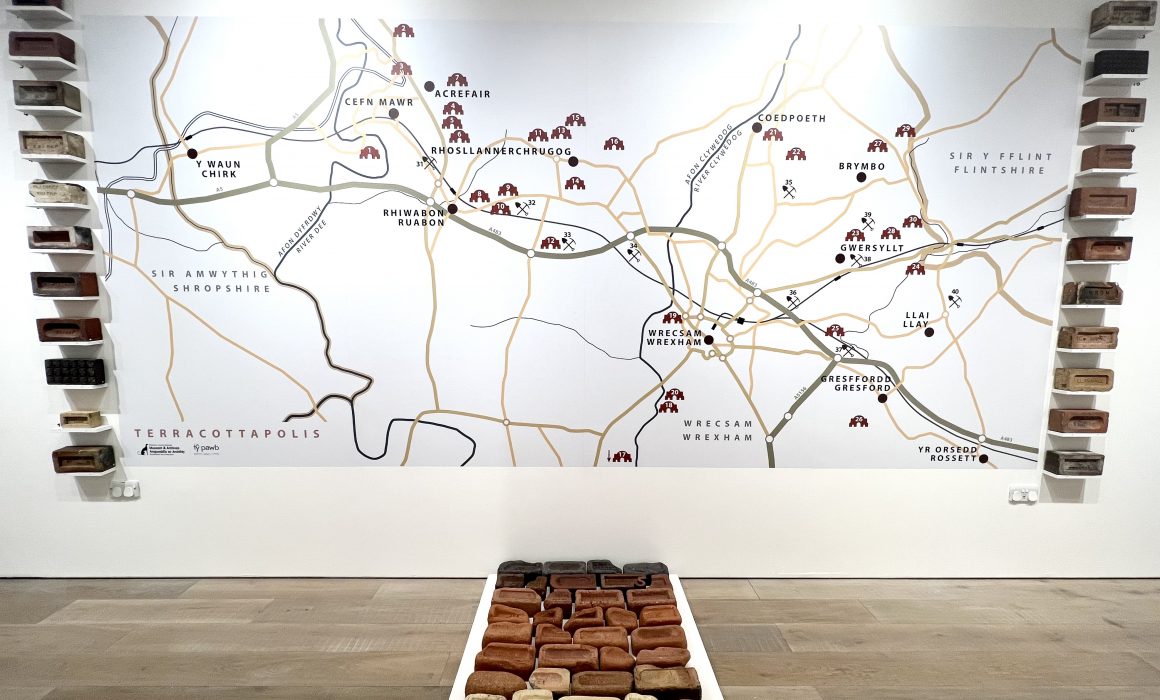 Wrexham got its nickname of ‘Terracottapolis’ from the massive amount of high quality bricks, tiles and other terracotta products that were manufactured here and distributed across the world from the nineteenth century to the early 2000s.

The local clay soil and plentiful supply of coal made this the perfect place to manufacture the bricks that the Industrial Revolution’s building boom desperately needed. There were once over a hundred brickworks in Denbighshire and Flintshire, from small-scale local suppliers to much bigger companies like J.C. Edwards and Dennis who employed well over 1000 people at their height.

James Coster Edwards was born in 1828 and started up his own brickworks in the 1850s after his father, William, a clerk at Pickering’s Works in Cefn Mawr, bought some old coal workings next to the Llangollen Road in Acrefair, near Ruabon. These pits also provided access to lots of clay and by 1885 Edwards owned three brickworks:

By 1890 a combined total of 70 brick presses and 80 kilns at Edwards’ works enabled him to produce huge quantities of architectural terracotta and decorative tiles. All three brickworks had closed by the mid-1960s and bottle and beehive kilns were demolished and the sites cleared.

Henry Dennis was one of the most famous industrialists in late nineteenth century Wrexham. Originally from Cornwall, Dennis became mining engineer and colliery owner, establishing the Hafod Brickworks, which would later become Dennis Ruabon Ltd, in 1878. Dennis built a new factory in 1893, which became known as the ‘Red Works’ for the bricks, tiles, and chimney pots that were made there.

By the late 1970s Dennis Ruabon was mostly producing quarry tiles rather than bricks. They were the last brick and tile works in North Wales and eventually closed in 2008. However, a new company called Ruabon Sales was formed on the site and the Ruabon name is still carried on the tiles they produce.

Terracotta means ‘baked earth’. It’s been used as a building material for thousands of years and is made by moulding and firing clay to form bricks, tiles and other architectural material. Terracotta is hard wearing and versatile and its fine texture means it can be used to create decorative pieces with fine detail. Well-fired terracotta can last for hundreds of years.

The clay in the Wrtexham area is called Etruria Marl, and it can only be found in the Denbighshire coalfield. Etruria Marl has a high iron content which gives the bricks and tiles that are made from it a distinctive rich red colour. This marl was perfect for producing the fashionable ornate bricks and tiles of Victorian times because it did not shrink, crack or warp in comparison to clays from elsewhere.

Bricks and tiles made in Wrexham and the surrounding area were used to build houses, schools, universities, hospitals and all kinds of architectural projects across the UK and further afield.

Local terracotta helped to create factories for international firms such as Ford, McVities, Dunlop and Courtaulds, and naval bases in Singapore. Tiles from Trefynant were of such quality that they were a natural choice when deciding the interior design for the palaces of Indian maharajas and great ocean liners including the Queen Mary, the Lusitania and the Titanic.

You can still enjoy the work of the highly skilled modellers, mould makers and kilnmen of Terracottapolis in many places including:

– the Church of St. John the Evangelist, Rhosymedre