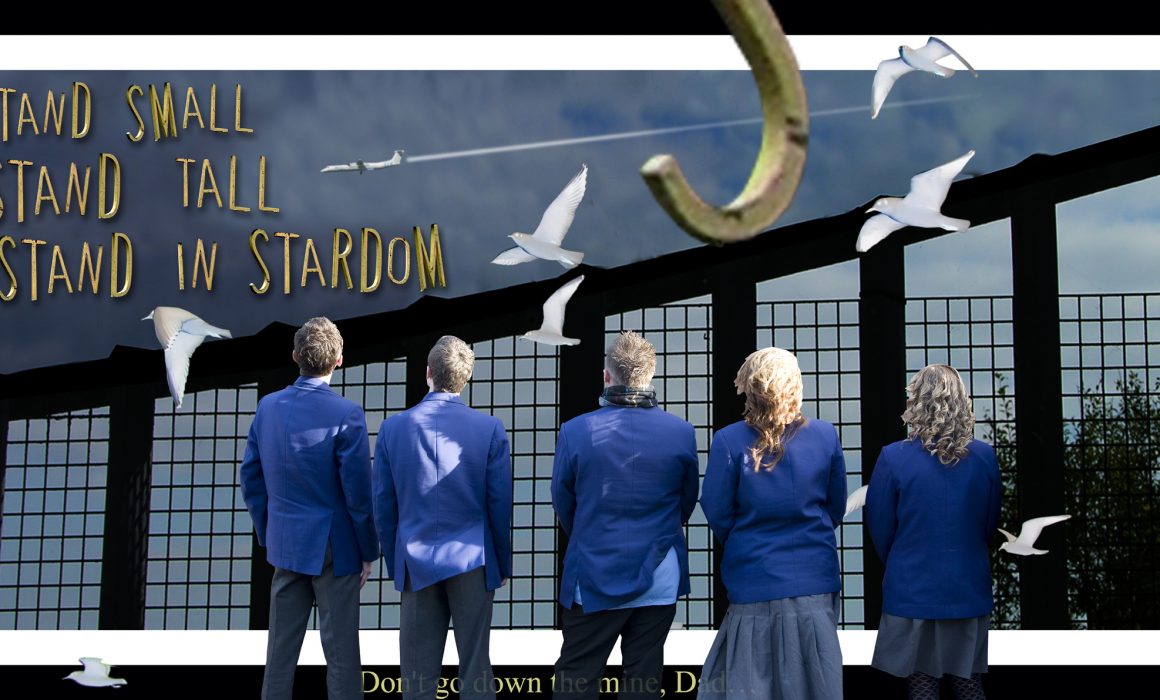 Tŷ Pawb is delighted to announce Alan Dunn as the artist commissioned for Wal Pawb in 2022.

The project that Alan will develop as part of the commission is titled ‘FOUR WORDS: RECIPE’, and celebrates Tŷ Pawb’s market traders. Through the use of photomontage, Alan will create a series of tableaux, with a specific focus on food traders. Together with Alan, the traders will be invited to compose four-word slogans or mini-manifestos which will feature prominently in the final designs.

The project will also be developed in collaboration with local musicians, as a precursor to further work by Alan Dunn that will be developed for a music-themed exhibition in Ty Pawb’s main gallery, launching in early 2023.

Alan will commence work on the project in July, with the final artwork to be unveiled in March 2022.

Wal Pawb represents a bold statement about this coexistence, and Alan will reflect the building’s multiple uses and users, and the relationships between them, in the final work. The two billboards that comprise Wal Pawb are a key feature of Featherstone Young Architects’ award winning vision for Tŷ Pawb and occupy a central position within the building. They overlook a food hall and multi-use market square, sitting on the external facade of the galleries.

Blurring the lines between art and music

Alan Dunn said: “Over the next year, I think we will need to (re)build our society around such ‘analogue’ interactions as ordering food and live music, which started me thinking about celebrating some of Tŷ Pawb’s food traders through vibrant three-part ‘rockstar pose’ tableaux. I first visited Tŷ Pawb to see Kevin Hunt’s wonderful billboard and the whole experience and atmosphere in the space and the high quality of work on show on the billboard and in the gallery immediately struck me as really unique. All my work involves the blurring of lines between art, music, billboards and sport and so on which makes me incredibly excited to be working with the team and community at Tŷ Pawb on FOUR WORDS: RECIPE.”

Jo Marsh, Tŷ Pawb’s Creative Director, says: “The Wal Pawb billboards are a cornerstone for Tŷ Pawb. The artwork and associated engagement activities represent so many facets of our mission and Alan’s proposal reflects this. We are thrilled to have Alan working with us to develop the fourth commission.”

Cllr Hugh Jones, Lead Member for Communities, Partnerships, Public Protection and Community Safety, added: “We wish Alan the very best of luck with his project for the fourth Wal Pawb commission and await with excitement the final artwork which will make an important contribution to animating of the market hall of Ty Pawb.”

Alan Dunn (born Glasgow 1967) studied community and public art at Glasgow School of Art and the Art Institute of Chicago and now lectures in Art & Design at Leeds Beckett University. Based in the Liverpool City Region since 1995, Dunn develops large-scale projects for the public realm, from the Bellgrove Station Billboard Project (Glasgow), through RAY + JULIE (public artwork with Brigitte Jurack, Liverpool) and tenantspin, a community-led Internet TV Channel developed with FACT, Superflex and city-wide high-rise tenants.

Dunn has collaborated with numerous agencies and institutions including Big Issue in the North, Wirral Drug Rehab, The Great North Run, Channel 4, Tate Britain, European Special Olympics and BBC Radio 3 and through these projects has presented content with and from David Bowie, Yoko Ono, Bikini Kill, Kraftwerk and ex-LFC striker David Fairclough.

In 2012 he was nominated for the Liverpool Art Prize and he is currently collaborating with Bluecoat and Belong on a four-year project introducing contemporary sound art into dementia care homes. Dunn runs the sound art label cantaudio and is co-founder of Alternator Studio & Project Space in Birkenhead. In 2016 he began his FOUR WORDS series of projects that bring together artists and members of the public in composing FOUR WORDS around specific themes to present to new audiences via electronic billboards, publications, TV adverts or, as with the recent FOUR WORDS: WIRRAL, a new Augmented Reality website for mobile phones.